Petrochemical Precast at Its Finest.

Speed of construction is one of the fundamental benefits that Tindall offers to petrochemical applications, and no project represents this more perfectly than the DOW petrochemical plant. Originally, the designs and schedule were based on cast-in-place construction, but Tindall took the existing strategy and transformed it into a precast plan. The original job consisted of two pipe racks and four process structures. This large reactor structure was estimated to take five months to complete using cast-in-place techniques, but Tindall accomplished it in just one week — with only seven ironworkers. DOW was so pleased with Tindall’s capacities, the precast scope was expanded to include the massive base to a 350-foot-high process structure tower.

The DOW petrochemical plant project was set to begin in January. However, due to outside circumstances, the schedule was delayed by four months. During this time, Tindall continued producing the necessary precast concrete components to complete four of the structures so that they were primed and ready to go when construction commenced. When it did, the erector was able to place 25 pieces per day, completing half the precast in just two short weeks. Because of this accelerated erection process, they caught up with the foundation contractor and had to stop erecting precast and pivot to erecting the steel until the foundations got ahead again.

Working as an embedded part of DOW’s design team, Tindall created steel-to-precast connections that eliminated all welding. They were set with such precision that the steel was erected in a third of the time that the sister train was two years earlier. This improved design and also resulted in savings that were passed back to DOW.

Given the speed, efficiency, and precision of Tindall’s work on the pipe racks and process structures, the client approached Tindall for another request: convert a 47-foot-tall cast-in-place tower base to precast concrete. At that time, the requested project would be the largest, most robust frame construction that Tindall had ever accepted. It took the Fluor team just two weeks to erect. 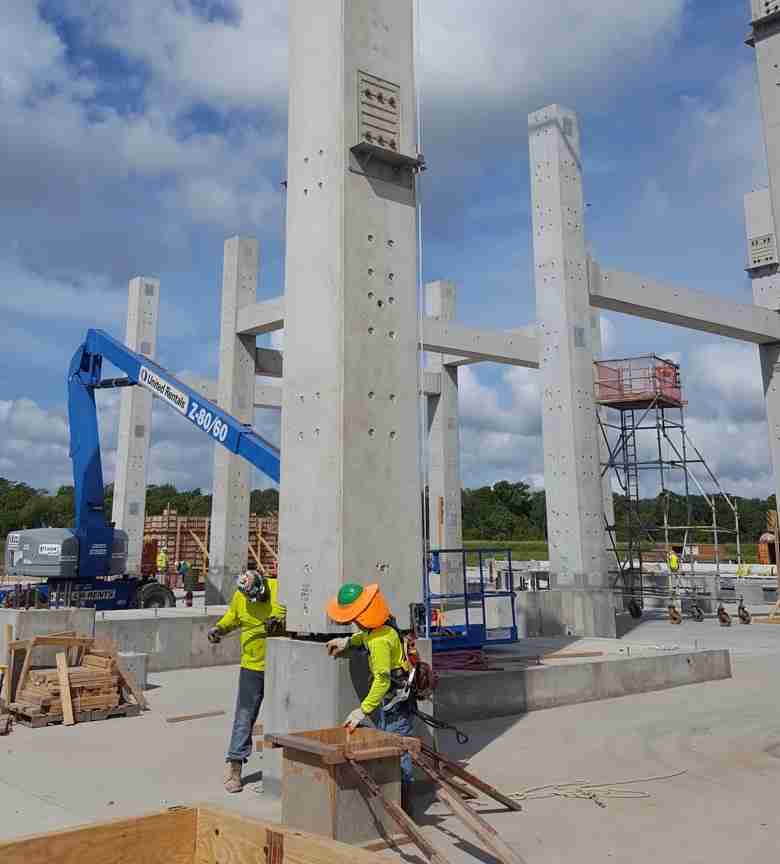 "This was truly a team effort, from our first collaboration with your engineering team to the placement of the last member on site. What typically takes months to build through cast-in-place was reduced to just days with precast. The final results are a very safe, efficient, high-quality installation. The cooperation and professionalism demonstrated by your team is first rate."